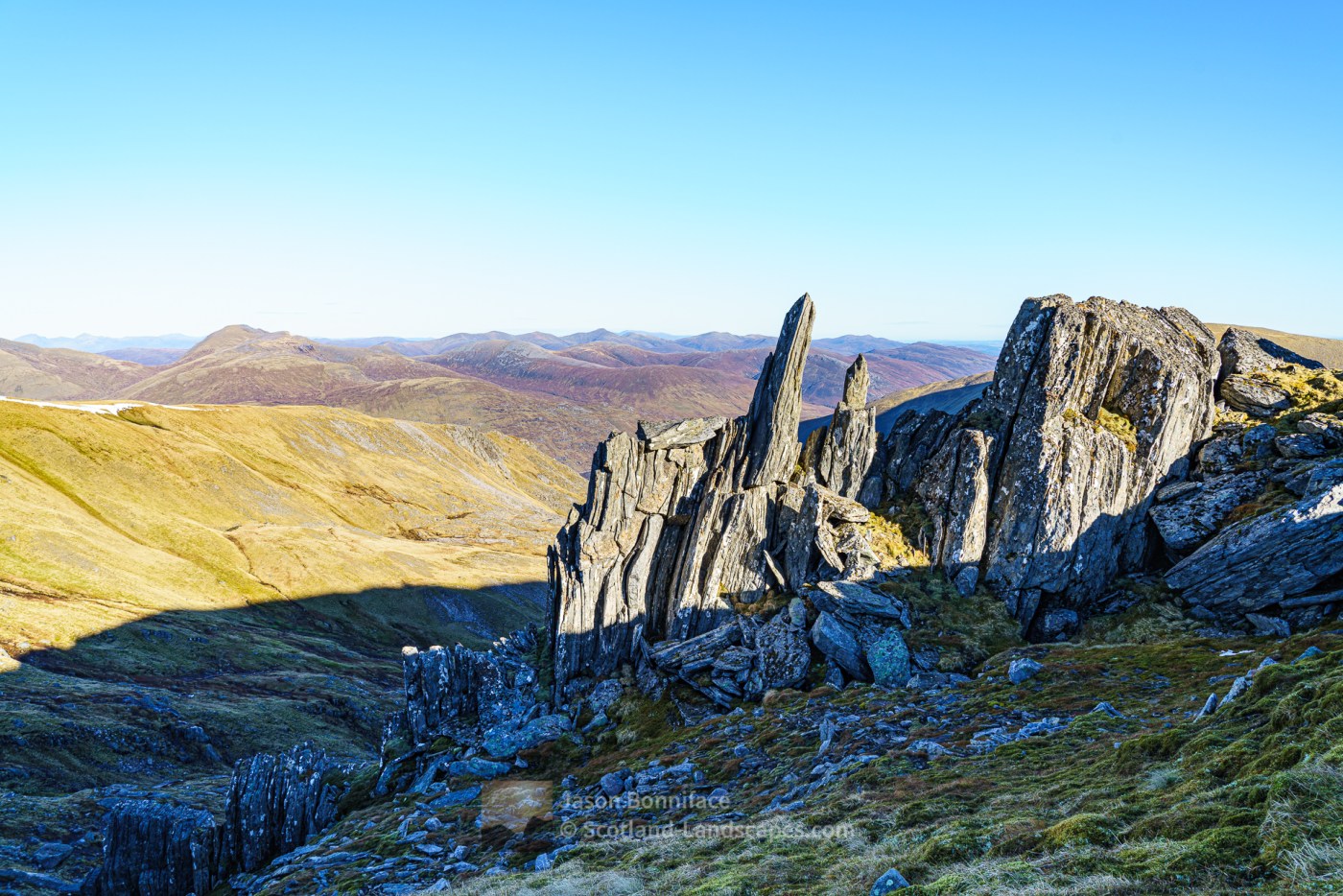 In early November there were a couple of days of high pressure over Scotland with frosty mornings, light winds and bright skies forecast, with the possibility of inversion conditions. I decided to aim for a long walk on the high hills between Glen Affric and Loch Mullardoch, a chain containing five Munros; Toll Creagach, Tom a’ Choinich, Carn Eige, Beinn Fhionnlaidh and Mam Sodhail.

Or view details of this route and my day on Strava:

I meant to set off before 7 am in order to make early progress, with the clocks having changed and evening light in short supply but, after arriving late the night before, and being slow to emerge from my sleeping bag into the chill, it was closer to 8 by the time I started. There was low misty cloud hanging around but the chances of cloud free summits above the inversion looked high.

I headed into a murky Gleann nam Fiadh from the car park just east of the Chisholme Bridge and passed new hydro-electric works as the sun began to make an appearance behind, highlighting the slopes of Tom a’ Choinich above.

Thereafter the path up the glen turns in to a boggy mess and I was glad to turn north up heathery slopes towards Toll Creagach on a mix of indistinct human and deer tracks, emerging through the mist at about 800 metres into a sunnier world. From the summit the views were stunning and extensive in all directions.

Moving off west towards Tom a’ Choinich I disturbed a ptarmigan amongst the rocks and it was good enough to let me get a passable photo. A chilly wind was whistling through Bealach Toll Easa but the fairly substantial reclimb to Tom a’ Choinich warmed me again. Beyond, the views west along the ridge to Carn Eige and Beinn Fhionnlaidh open out and the going is easy enough towards the steeper and rougher prow of Sron Garbh (rough nose). Here, an old constructed stair case of stone steps can be identified and followed on the ridge for a way around a small outcrop. I’m guessing this may have been constructed in Victorian times to aid estate guests (but that is just my guess – if anyone knows I’d love to hear).

After Sron Garbh, the ridge narrows a little at Stob Coire Dhomhnuill and the views were impressive. I took a series of photos to produce the interactive panorama below (not quite a 360 degree image due to difficulties stitching images together directly into the sun to the south).

At the west end of Stob Coire Dhomhnuill there are impressive rock formations and pinnacles. The pinnacles are given a brief mention as a Grade 1 scramble in the SMC Highland Scrambles North book, but today I was intent on making progress rather than taking time to scramble, so I took the path by-pass and headed onwards to the summit of Carn Eige.

At Carn Eige I reviewed the time and decided there was enough available to head to Beinn Fhionnlaidh, a remote Munro that is an outlier from the main ridge. It juts out about 2.5 kilometres to the north towards Loch Mullardoch with a drop down to 832 metres from the 1183 metre Carn Eige. There is a reasonable path most of the way near the crest of the ridge and the going was fairly quick. After the pull up to its summit I enjoyed a few minutes taking in the remote tranquillity of the hill. It is not every day that most of us get to visit a place like this. I took a 360 degree panorama from the summit of Beinn Fhionnlaidh, see below.

I made my way back to the bealach and retraced my steps up the ridge of Carn Eige to a levelling just above 1000 metres. From here a rough traverse can be made across the western slopes of Carn Eige towards Mam Sodhail to avoid going all the way back to the summit. There may also be a trodden path a little below this line that avoids the first part of the reclimb up the ridge but has a longer rising traverse instead.

Before too long I was on the giant summit cairn of Mam Sodhail taking in the more overcast view. The giant cairn was constructed during early Ordnance Survey mapping of the Highlands, the summit of Mam Sodhail being an important location as the second highest summit north of the Great Glen behind neighbouring Carn Eige (1181 to 1183 metres respectively). Remains of an old stone hut lie below the summit, apparently used in the past by the estate.

I descended passed the hut to the head of Coire Leachavie where an old constructed path winds down into the glen providing an easy way off the hill. Lower down the coire is boggy and the path has been covered in places but it is easy enough to follow down to the main path on the north side of Loch Affric. I missed the best of the afternoon light in the confines of the coire but there were glimpses of promise.

Darkness gathered as I started on the 7 kilometres back along Glen Affric to the car but I was re-invigorated after a rest and a sublime honey sandwich in a lovely spot under a pine tree en-route.

See a gallery of all images from this route below.