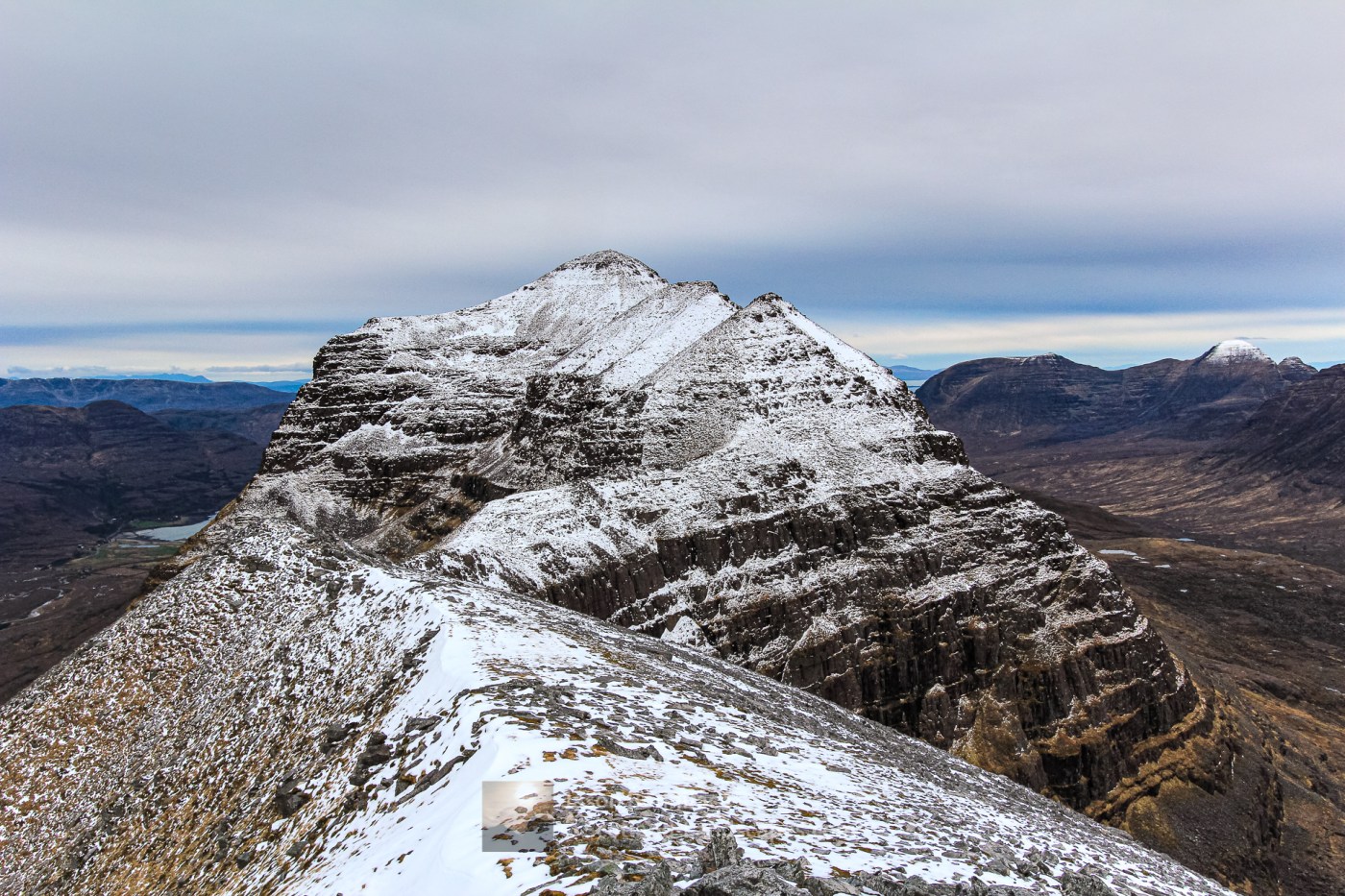 Liathach is a towering and shapely giant that dominates Glen Torridon in the heart of Wester Ross in the north west Highlands – it is one of the very finest peaks of Scotland and the British Isles. It is built from tier after tier of billion year old Torridonian sandstone and capped by pale Cambrian quartzite. Liathach has two Munro summits; Spidean a’ Choire Leith, the mountains highest point, and Mullach an Rathain, accompanied by a further four Munro subsidiary Tops; including the fantastic Am Fasarinen and its pinnacles, and the outlying Meall Dearg, joined to Mullach an Rathain by the Northern Pinnacles. Torridon or Kinlochewe are perfect bases for climbing Liathach – you can search and book accommodation here.

Read on to see and find out more about this fantastic mountain or jump straight to one of the options below:

Gallery of all Liathach images

Explore Liathach with the interactive map of the peaks, photos and indicative routes below. Click on a feature to see photos and more information; see a legend by toggling the side panel and switch layers on and off. View a larger map here. Please let me know what you think!

Interactive map of Liathach including the Munro summits and tops, photos

The eastern end of the Liathach ridge is most easily gained by either of two routes: by a small path from Glen Torridon up the Allt an Doire Ghairbh into the shallow and steep Coire Liath Mhor and on up steep ground to a low point between Stuc a’ Choire Dhuibh Bhig and Stob a’ Choire Liath Mhor; or from the Coire Dubh Mor path where, a little over a kilometre from the car park on the main road, gorgeous easily angled Torridonian sandstone slabs can be followed to reach steep heather and scree on the eastern side of Stuc a’ Choire Dhuibh Bhig and a way worked up and right (northwards) to reach the upper north east ridge. Easy scrambling leads through a tier of sandstone to bouldery quartzite above.

Stuc a’ Choire Dhuibh Bhig, Liathach’s most easterly top, offers a classic and sensational view west along the spine of the mountain to the aesthetic pyramid like summits of Stob a’ Choire Liath Mhor and Spidean a’ Choire Leith. The ridge is beautifully poised above the surrounding crags but in summer conditions the going is ultimately straightforward as it undulates and winds high above the glen to Liathach’s highest summit Spidean a’ Choire Leith (1055m/3461ft).

The Am Fasarinen pinnacles make up the most tricky scrambling section of the Liathach main ridge and divide the mountain’s two Munros, Spidean a’ Choire Leith and Mullach an Rathain. In summer their traverse is a classic and highly recommended scrambling grade 2. In winter they are given a winter climbing grade in appropriate conditions. Most difficulties can be avoided but the most fun can be had taking most obstacles fairly directly. The ridge is airy but generally the scrambling moves don’t feel too exposed. Read a detailed route description in the SMC guide Highland Scrambles North.

Mullach an Rathain is the second Munro of Liathach at 1024m/3359ft, some 31 metres lower than Spidean a’ Choire Leith. It is easily reached from the west end of the Am Fasarinen pinnacles along a rising and undulating grassy ridge. It is a spectacular and very fine viewpoint on a good day. It is most commonly ascended/descended via the shallow coire of Toll Ban on it’s southern slopes. In summer a rough path climbs the coire headwall on quite steep ground. In snowy conditions this path may be obliterated and avalanche risk may need to be considered.

Meall Dearg is a lower Munro Top to the north east of Mullach an Rathain, outlying from the main ridge – to which it is joined by the Northern Pinnacles that form a tricky scrambling barrier. Meall Dearg is perhaps the most tricky Munro Top to reach apart from several in the Cuillin of Skye. The easiest route involves a dodge of any real difficulty up the grass and stones near the gully between Meall Dearg and the Northern Pinnacles from Coireag Cham, the upper coire of Coire na Caime. This might not be the most satisafctory ascent however.

The main descent routes from Liathach are the same as those already mentioned in ascent. An additional possibility is the north west ridge of Mullach an Rathain (between Coireag Dhearg and Glas – Toll a’ Bothain) which although steep, rough and pathless gives a feasible route down the north side of the mountain. From here an easterly traverse can be made across the mouth of Coire na Caime towards the Coire Dubh Mor path and the east end of the mountain – this removes the potential need for a boring walk back along the road after a traverse and lets you explore rough, wild, remote country instead.

Discover and explore Torridon through the articles and links below.